An Oriental Hillbilly, An Uncredited "Doo", and a Cat in the Dark

When an Oldie Really Is a Goodie

A long time ago, way back in the early 1970s, a Brand Spanking New model airplane company sprang into life in Japan. It called itself Mania Hobby Co. Ltd, and it produced some of the finest plastic model airplane kits ever seen, not only rivaling but actually exceeding the best the big, well-established Japanese companies could produce with its very first issue, a 1/72nd scale Nakajima Ki-27 "Nate". To put it mildly, that kit was astounding, with optional canopies, optional landing gear parts, auxiliary tanks to be fitted to the "B" model (the kit could yield either of the primary production models of the airplane), plus a decal sheet to make the best of aftermarket companies drool; I think there were 12 or 15 different markings variations on that decal sheet. The kit was a revelation.

Then, in the late 1970s, Mania dropped another bombshell on us and produced a second kit of the Ki-27, this time in 1/48th scale. It too was a revelation, with an interior far better than that generally found on plastic kits of its day and engraved surface detail that had to be see to be believed. The kit didn't provide optional landing gear and only offered 5 sets of markings, but it was still the Best Thing Out There when it was released. Mania was bought by Hasegawa shortly thereafter (or taken over, or seized, or whatever may have actually happened to them; I'm not really too sure how that happened) and the "Nate", along with an excellent (for its day) F4U-4 and Kawanishi "George", were subsequently released under the Hasegawa label. All three kits reappear from time to time, with the Ki-27 often bearing an outrageous price tag. (By way of contrast the Corsair and "George" are always very reasonably priced. Go figure.)

Anyway, the "Nate" is an excellent kit, and doesn't need a whole lot of effort to build into a superb model of this outstanding little Japanese fighter. We haven't done any modeling for a while so let's go ahead and do some of that right now with the "Nate"! 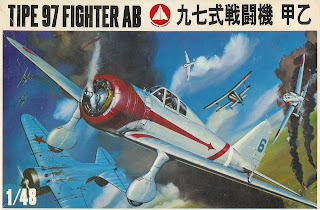 The box art on an original-issue Mania Ki-27. Their initial 1/72nd scale kit came in a plain brown cardboard box with no artwork on it whatsoever---they'd come a long way by the time they produced their quarter-scaler! Even more tantalizing was the side of the box that illustrated their next kit, a Mitsubishi A5M2a "Claude". We never got that "Claude", but the "Nate" has been a staple kit in the Hasegawa lineup for over forty years; not a bad run at all! 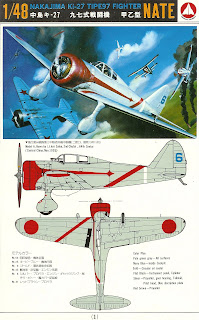 The front page of the instruction sheet. All 5 markings options were given in full color, something that's rarely found in today's kits. Every single thing about  this kit, at least in its original boxing, is simply incredible! 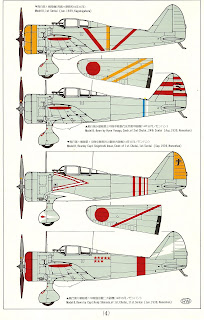 The rest of the markings sheet. Note how the drop tanks are indicated for those aircraft that were documented as carrying them. This kit was a Class Act! 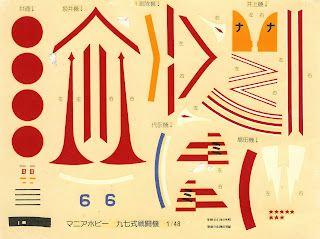 And the original decals. The irregular white "blobs" evident on the sheet are insect damage created by the bugs in my attic. I suspect these decals are entirely useable; I built one of these kits 3 or 4 years ago and used the kit decals for the walkway and Sentai markings---they worked like a champ and settled right in with a very light application of SolvaSet. Did I mention that this is an extremely buildable kit? 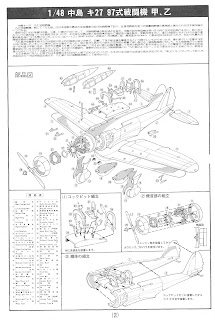 Page One of the instruction sheet. The interior is basic by today's standards but exceptionally well-detailed by those of its day. The Ki-27 has a tiny cockpit opening and you can't really see a whole lot in there once the kit's been assembled. I detailed the instrument panel and added the ubiquitous Eduard lap belts, but the interior is bone-stock otherwise. The engine will benefit from careful painting and assembly but, much like the interior, is so thoroughly hidden once things are together that extensive detailing is a wasted exercise unless you plan on building the model in a maintenance setting with the cowling removed. Conventional wisdom regarding Japanese colors changes the way some folks change their socks, but as of today Those Who Know Such Things are fairly well convinced that the "Nate's" interior was a darkish blue gray, so that's what I did on the interior of the one I'm building right now. I did, however, leave the floor (which is the top of the wing on the real airplane) and the seat in aluminum. You don't have to do that if you don't want to. 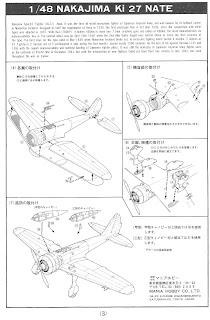 Here's the rest of the instructions! Most of what you'd want to watch for is on this page, so let's talk Model Airplane for a minute:
This is a really simple kit, and the toughest thing about it is figuring out which scheme to use. You'll need some basic modeling skills to get the big pieces to fit, and you can plan on using a little bit of filler and sandpaper, but it's an easy date and it looks really good on the shelf once it's done. I'd strongly suggest getting yourself a copy of Kagero's Nakajima Ki-27 Nate (Monograph #11) for the photographic references and drawings contained therein, but you really don't need anything else and you could, quite frankly, do an acceptable model with nothing more than what comes in the kit. Doncha love it when a plan comes together?! 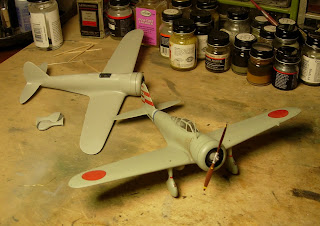 Here's my first "Nate", a Ki-27 Otsu representing an aircraft flown by Yonaga Hyoe, who led the 24th Sentai/2nd Chutai in Nomonhan during August of 1939. Decals are from the kit and the paint is Testor ModelMaster enamel. It's possible that I'll go back and add an antenna wire someday, but don't hold your breath on that one---this model is now several years old and low on my rework list. 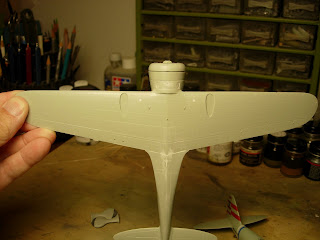 Plan on using a little bit of putty on this model. In this shot I've already filled the holes for the aux tanks but not the ones for the (presumed) offboard drains. The horizontal stabs still need a little work. 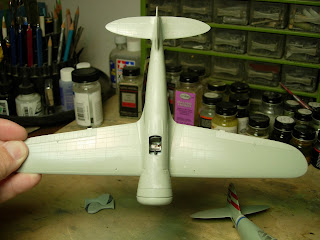 And the top side. Note that I've opened up the holes for the landing gear struts and filled the one for the gun camera. The struts will be done with steel-painted Evergreen rod. You can really see the seat in this view but it'll partially disappear once the canopy's in place. (You can't see much of anything in there unless you either open the canopy or use a vacuum-formed one; I'm not inclinded to do either. Call me irrresponsible!) Oh, and note the putty at the aft end of the horizontal stabs. There's a big seam back there if you don't correct that part of the model. Still and all it's an easy kit, and you could get most of it done in a weekend if you wanted to.

I've mentioned ad nauseum that I don't have much personal time anymore so I won't dwell on that just now, but it's going to be a week or two before this thing goes to the paint shop. If it actually gets finished I'll run a photo or two in a later blog.

Way Back When, in one of our early printed efforts, we did a piece on the McDonnell F-101 Voodoo. You've probably already figured that the "Doo" is one of my favorite airplanes---here's a fine shot of one from the Maine ANG for your consideration: 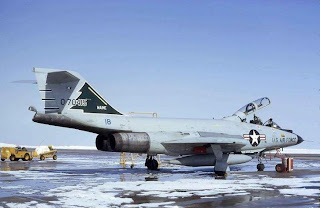 Here's a great study of F-101B 57-0415 when she was serving with the "Maine Bangors" 132nd FIS/101st FIW. Maine lost their ADC mission in 1976 and converted to tankers, thus ending a long association with fighters and the interceptor mission, while 0415 was converted to RF-101B configuration. Somewhere in the general mess I've made out of the last couple of weeks I've lost the credit line for this photo---it's embarassing but true! Could whoever sent it to me (Don?) please contact me so I can credit it properly? Jeez, Louise!

A Cat in the Dark 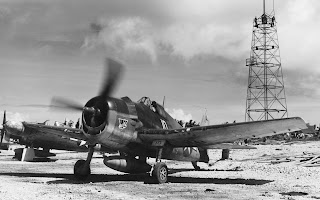 Are you folks tired of that whole NavRes "V" thrash? Me too, at least for right now. Let's look at an airplane that doesn't have a goofy prefix to its BuNo, an F6F-3N of VMF(N)-534. The airplane was assigned to Orote, Guam, when this shot was taken on 21 August 1944. Japanese aerial opposition had been pretty well eliminated by the time the Marines were able to get night fighters on the island and their aircraft consequently spent a lot of time dropping bombs in day ops. Note the taped-over outboard gunports and the generally nasty condition of the airframe. USMC via Bob Marshall/Jim Sullivan

is one lonely little minute, so be good to your neighbor. We'll meet again later this week.
phil
Posted by phillip friddell at 2:38 PM