Cactus, A Little More on the Invader, A Spad in the Med 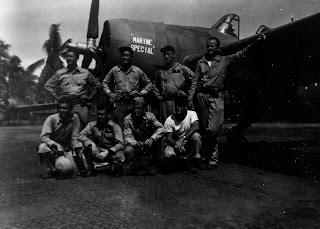 Tribute to the Hard Corps

Those of you who read history, and I'm presuming that would be almost everyone who's interested in this blog, are aware to one extent or another about the struggle for Guadalcanal. It was a pretty tough fight in its early days, a struggle against a well-trained, highly-motivated and aggressive enemy who held most of the advantages. The initial assault on the island (and on neighboring Tulagi) was a Navy show at the beginning, quickly transitioning to a Marine affair as the corps was able to get aviation assets on the ground. Let's do a quick photo essay on the Marines at the 'Canal. It's the right thing to do today, I think. 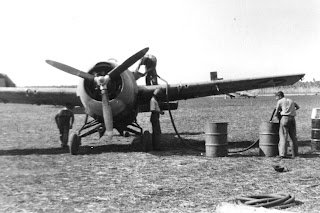 Field conditions on the 'Canal were primitive at best. Here's one way to refuel a fighter; not the preferred method, but it works. This photo was shot in the October/November 1942 time frame, after the worst of the fighting was done. Still, "That Damned Island" was a dangerous place.  Admiral Nimitz Collection via Bruce Smith 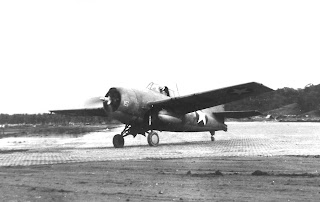 Taxiing out for a mission. The Wildcat could be fitted with a centerline auxilliary tank and that tank was used early on. The later, 58-gallon underwing tanks were preferred when available and it wasn't unusual to see a tank slung from the port wing only. The Bad Guys were never far away on The 'Canal.  (Note the presentation of the side number on the nose; this is actually Number 21; the photo has been printed backwards.)  Admiral Nimitz Collection via Bruce Smith 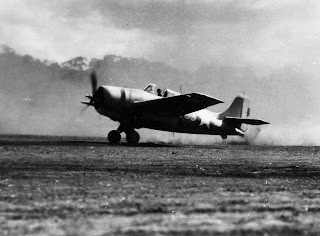 Sometimes aviation writers use the expression "often seen", which would describe this moderately famous shot. Still, it provides the flavor of air ops in the Solomons and is well worth inclusion for that reason. Note how the fabric covering on the rudder shows up as a completely different shade than the adjacent fin and rudder trim tab. Modelers beware!  Admiral Nimitz Collection via Bruce Smith 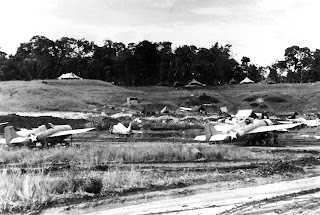 Another one we've seen before, but interesting because of the side number treatment on the aircraft in the foreground. The Wildcat on the left has its side number in black and the number is fairly small, with the tops of the numbers even with the top of the right-hand star point, while the one on the right has a much larger presentation in white.  This photo really tells the story of Marine air in the Solomons.  Admiral Nimitz Collection via Bruce Smith 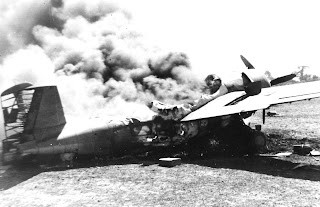 The Japanese Naval Air Force bombed the Guadalcanal complex of airfields with a great degree of regularity, particularly in the early days, but it was the warships of the Imperial Navy that wrought the most damage. Here a Marine F4F-4 burns in the aftermath of a nocturnal Japanese bombardment.  Admiral Nimitz Collection via Bruce Smith 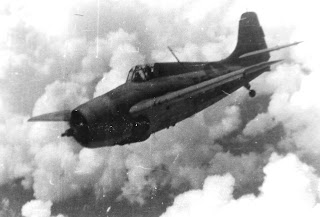 This admittedly poor photograph is remarkable because it depicts a Marine Wildcat on patrol near Guadalcanal. Air-to-air photographs of any Marine aircraft operating out of the island are rare in the extreme, making this shot significant. Up and at 'em!  Admiral Nimitz Collection via Bruce Smith 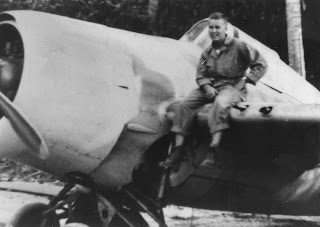 Tribute. A young Marine aviator sits on the wing root of his fighter, posing for the folks back home. Thanks, Gyrene, to you and the thousands of others who stood up when you were needed. We all owe you, and your kind, a debt we can never repay. Semper Fi!  Admiral Nimitz Collection via Bruce Smith

A Variety of Color

Yesterday we ran a photograph of a "Nimrod" B-26 operating out of NKP, Thailand, during the Vietnam War. It was in camouflage, which I'm sure you all noticed. Here's a scan of the appropriate page from T.O. 1-1-4 defining that camouflage should like like according to regulation: 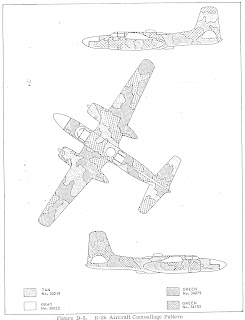 The Air Commando Invaders didn't always conform to the standards defined by 1-1-4. By the time yesterday's bird was photographed most B-26s had black bellies, and there were other variances in the official scheme as well. It's stuff like this that makes it fun!  Friddell Collection 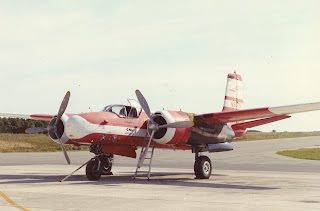 And now for something completely different! Here's N8417H, an A-26 owned and operated by CalSpan during the 1960s. There was a time when the Invader was popular for corporate use because of its speed and range---remember that there was no such thing as a purpose-built corporate aircraft back then! In theory the civil A-26s had it all but the noise, coupled with the fact that entrance and egress was through the bomb bay, limited its appeal to some extent. The Howard 350 and 500 quickly took over the converted warbird corporate marketplace and the introduction of the Lear Jet quickly relegated the converted bombers to relic status. They sure were pretty, though...  John Kerr Collection

Calm Before the Storm

The Douglas AD Skyraider series, redesignated the A-1 during the 1962 realignment, had an operational career that spanned two major conflicts before its retirement. Most of us think of the "spAD" in one or the other of its wartime guises, but a great part of its career was spent in non-combat deployments. Rick Morgan sent in this shot a few months ago and I've been putting off running it til an appropriate time. This holiday would seem to be that day. 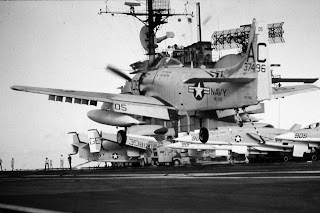 BuNo 137456, a VA-176 A-1, traps aboard the Saratoga during her 1967 cruise to the Med. Note the SEA mission markers under the canopy. "Sara's" Air Wing during this cruise (CVAW-3) boasted one of the weakest attack components of the era, with just VA-176 and VA-216 (A-4Bs) aboard; there was no medium attack component on this deployment. There's a "Vigi" from RVAH-9 in the background. Of interest to modelers is the staggered placement of the A-1's underwing pylons---they weren't evenly spaced and that shows up well in this photo. If memory serves, every kit of the Skyraider got this detail wrong. This was the last Med deployment of the single-seat A-1s.  USN via Rick Morgan

A Thought. Just a Thought.

Today's a special day; a holiday that honors this nation's fighting men and women. Take a minute to thank a GI, active or retired, the next time you meet one. It's the right thing to do.

Meanwhile, be good to your neighbor and we'll see you again real soon.
phil
Posted by phillip friddell at 6:53 PM