Slightly Before Fame, A Mitchell, One More Mitchell, And a Pair of SLUFs

Yep; you read that correctly! While I don't think I've actually succumbed to the annual wish lists that beguile such a large percentage of the folks engaged in our hobby each and every year, I do have a small bucket list of airplanes that I think deserve to be kitted in my preferred scale of 1/48th. Two of the kits that would have been right up there at the top of any such list originating from me have recently been kitted; an FJ-2 with an FJ-3 in the pipeline too, and a P-51H, so there's hope but we've still got a ways to go so, without further ado, here it is. The List! (Please note, yet again, that I want these in 1/48th scale. I'm not trying to be hateful towards anyone that builds those other scales but it's my list, remember, so 1/48th it is!)

An F-100D done to contemporary standards, and including most of the variations for that aircraft in the box---all the various tanks and stores, all the pylons, at least two styles of refueling booms, both speed brake configurations, and a vertical stab that caters to the pre-Vietnam War "PACAF Mod". I would like for the kit to be done without provision for opening panels too, thank you very much!

A state-of-the-art F-100F, done to the same standards as the F-100D cited immediately above and with all the appropriated mods as previously cited. Second verse/same as the first, as they say...

An accurate and state-of-the-art RF-101C. We've already got a decent one, you say? Well, take a look at the shape and size of the nose on the currently available kit and compare it to photographs of the actual airplane. We need an accurate recce Voodoo that's relatively easy to built and that existing new-ish kit isn't it.

A slatted F-86 Sabre. This one's a no-brainer and, in all likelihood, a license to print money for anyone who takes the plunge, but nobody has bothered to do it yet. There ought to be two separate kits featuring type-specific fuselages and windscreens for the aircraft as well; a kit for the A and another for Everything Else. Optional panels should be restricted to the ability to do a Project GunVal nose and nothing more and, much like our kit for the "Hun", it should include all the stuff we could legitimately put under the wings. (Maybe, just maybe, there's one on the way since we've just seen a mostly-decent FJ-2 get itself released, but I'm not holding my breath just yet!). Oh, and throw an F-86H in there while you're at it, please!

An F-80, both as an A and a C, which probably means two kits. Yes; I frequently say I like the existing Monogram kit of the Shooting Star and I mean it, but it's time for something a little bit better, a kit without opened panels and including all the pylons and underwing stores affiliated with the airplane. This one's another no-brainer, I think.

An accurate MiG-15, with all the applicable underwing stuff in one kit. While it's true that there are a handful of kits of this most important of first-generation jet fighters already out there, they're all flawed to one extent or another. Much like the slatted F-86, this one is truly needed and, in all likelihood, another one of those licenses to print money for whoever decides to accept that particular challenge.

An accurate MiG-17, preferably in its later iterations as applicable to use in SEA. Think about it for a minute: The "Fresco" was one of those seminal fighters that saw active service in every corner of the globe wearing the national insignia of numerous air forces and we still don't have a truly good kit of it. And yes, Virginia; I would like all the applicable pylons and stores for it as well. I'd also like a MiG-17PF as a separate kit, but not at the expense of a good model of the day fighter.

An accurate F8F Bearcat, buildable right out of the box with no aftermarket required to achieve an accurate model. Really, people!

An accurate and state-of-the-art F9F, both in its -2 and -5 iterations. This one's another seminal aircraft and Monogram's kit is ok but it's also 40 years old, give or take. It's way past time for an up-to-date and accurate kit of this one!

And now, while we're Living Large; here are the Big Guns on my list:

A B-45 Tornado, preferably with the option to do an RB-45 from the same kit. Yes, it would be really big and yes, it's somewhat lesser-known, but it's also a seminal jet bomber that was used heavily by the USAF in its recce versions during both the Korean nastiness and the Cold War.

An accurate and state-of-the-art B-57; a basic B-model with the different noses and all the underwing stuff, as well as wing-gun mods, and all in the same kit. Yes, there already are two existing kits and yes, you can get there from here with either one of them, but both fall somewhat short of the mark and could stand replacing. It's too much to ask for an RB-57F as well, since only a handful of people (including me) would actually want one, but maybe someday...

A B-66, or maybe an RB-66. I'm not picky about the variant on that one. It's another mainstay of the Cold War USAF and an active participant in the early and middle years of the conflict in SEA, a seminal if somewhat inadequate airplane. 'Nuff said.

There's my list, then. Some, like the F-86 and MiG-15, are must-haves and I truly can't understand why we don't already have the kits in hand for them. Others, such as the B-45, might be a stretch but, like I said in the beginning: This is my want list, and it may or may not coincide with yours. We could probably get some of those kits too, the single-engined ones anyway, if all the world's manufacturers of plastic model airplanes would lay off the Bf109s, P-51s, and Spitfires for a while and issue some things that aren't already on the market in vast quantities.

For what it's worth!

Before She Hit the Big Time

Nowadays Curtiss AT-9 41-12150 lives in its restored glory as an exhibit item at the NMUSAF, but there was a time when she was just old junk down in Texas. 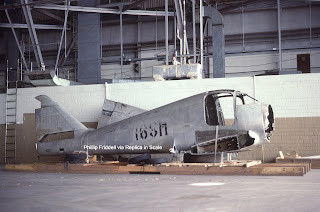 Roger Freeman, he of Old Kingsbury Aerodrome fame, found 150's hulk abandoned in South Texas, beginning a chain of events that resulted in the restoration of the airframe followed by its addition to the collection of that edifice once known as The Air Force Museum. Your editor (me) was poking around a disused hangar at what used to be Kelly AFB back in January of 1983 and discovered her recently recovered fuselage and wings sitting on skids prior to removal for restoration. Nobody had to tell me to take her picture!   Friddell 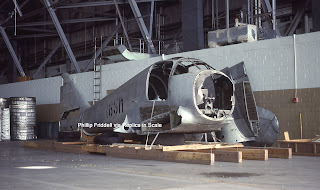 Here's a slightly different view of her. The lighting in that hangar was typically awful and I was shooting K25 off a monopod. It was a bit of a challenge but one well worth accepting!   Friddell 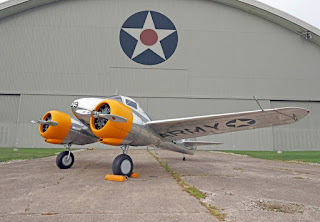 And here's what she looks like today, gleaming in a presentation of the markings she once wore early in her AAF career! A restoration team at Kelly performed a great deal of the necessary restoration work prior to shipping her north. What a treasure!   NMUSAF Photo

Bobby, of course, being Bobby Rocker. Here's a shot of "Mexican Spitfire", a 345th BG B-25D from The Bad Old Days for our consideration today: 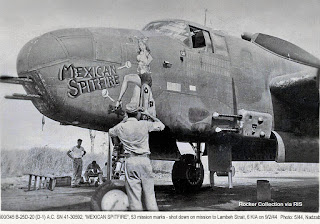 The "Spitfire' bought the farm in September of 1944; a sad end for a proud Mitchell. There were no easy days in the SWPAC...    Rocker Collection

Here's another bit of B-25 nose art for your consideration. This time it's the 3rd BG's "King Sol". The photo depicts a fairly early B-25 strafer and no; we don't have an overall view of her yet! 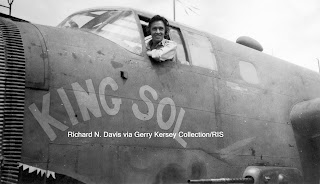 We're guessing "King Sol" to be painted in a fairly deep yellow and the airplane is wearing early B-25 gunpacks, but aside from that we don't know much! There's a tantalizing sharkmouth at the lower left side of the photo and somebody's having fun with some belted 50-cal draped across her over-painted nose, but that's about all we know at the moment.   Richard N Davis via Kersey

Let's remember those young boys of so long ago who risked and, in far too many cases, gave all they had in the name of our continued liberty. We know it's redundant to say it again, but let's raise a glass...

Many thanks to Gerry Kersey for this wonderful image.

I was talking with a friend of mine this morning who tactfully, if somewhat forcefully, reminded me that it's been a very long time since our last visit. (Again, Phillip? REALLY?)

This extremely abbreviated issue is a response to Frank's admonishment but it is, quite unfortunately well and truly abbreviated. We're going to end it today with a pair of 23rd TFW A-7Ds photographed on short final into Kelly back in December of 1979: 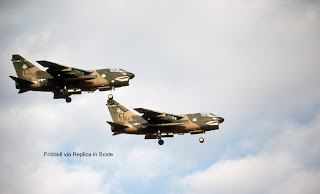 A pair of SLUFs from England AFB's 23rd TFW drift by just prior to recovering at Kelly on 09 December, 1979. They're a tiny bit of a world now long in the past, but a world we remember with great fondness. No; they aren't the greatly lamented Silver Air Force, but they're special nonetheless, at least to us.   Friddell

The present global health crisis has changed, and will continue to change, a great many things in our lives. With any luck we will all return to normalcy in a few weeks but until that day please stay safe, and do everything you can to stay healthy. In the meantime, I'll try to publish these things a little more frequently---maybe we can take our minds off the crisis for a while by looking at old airplanes.

In the meantime, and now more than ever; be good to your neighbor. We'll meet again soon!

Posted by phillip friddell at 4:20 PM