Marty was one of the early contributors to the original print version of Replica in Scale. We had never heard of him---back in those days few of the serious aviation photographers were well-known to the general public once you got past people like Bill Larkins or Peter Bowers and Jim and I were still the general public at that point in time---but we'd met Norm Taylor and he brokered the introduction to Marty for us, and to Dave Menard, and to several others as well. Marty and Jim forged a bond almost immediately, and from that day Marty's generosity and kindness could be felt in every issue of the magazine. He was a photographer and a collector, and a sounding board, and a seemingly unending source of information regarding the military aviation assets of the United States and, in particular, of the Air Defense Command, a subject about which he was both passionate and and authoritative. He was, as we quickly discovered, the go-to guy for the ADC. He was a friend.

He was also, as were (and are) so many others of his breed, kind, helpful, and willing to share. He was willing to teach. He was there when you needed him. On a personal note he was invariably helpful to me as I tried to make this reborn Replica in Scale a quality piece of work, and the days when the post office delivered packages from him full of slides, photographs, and documents to help with the latest project were joyous ones indeed.

Marty had been sick for several years and his ability to help others became increasingly diminished as he dealt with his health issues, but through it all he never lost his smile or his good disposition. Our conversations became less and less frequent as those months of illness turned into years, but he never changed his approach to life and you could literally feel him grinning that Isham grin over the phone as you talked. That was how he was. That was Marty. He's gone now, and it's doubtful we'll see his like again any time soon. Our time with him was special because he was special, and his passing is a sad day for us all. 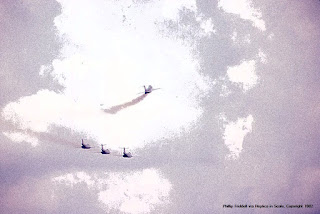